Last night I experienced the privilege of visiting the Tech Model Railroad Club on MIT’s campus.  As an avid model railroader, computer science major, and great admirer of books like Hackers and Accidental Empires, I’ve heard of the TMRC for most of my life.  As a kid, my parents bought the 1986 edition of World Book, which underneath the entry “Model Railroads” included a picture of the TMRC layout, something I’ve never forgotten. 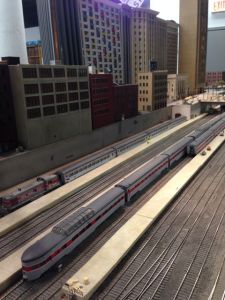 The first chapter of the book Hackers tells how some of the earliest computer science pioneers were involved in the TMRC .  A few of the notable members were Alan Kotok from DEC, Richard Greenblatt the coinventor of the MIT LISP machine (which is housed next door in the MIT Museum), John McCarthy who coined the term Artificial Intelligence and helped developed the LISP language, and Jack Dennis who was one of the founders of the Multics Project (the precursor to Unix).  These members along with others helped coin the term “Hacker”, and inscribed within the “Dictionary of the TMRC language” was the (now immortal to all computer scientists) phrase “Information wants to be free.”  These guys were budding computer scientists, brilliant minds, mischievous hackers, and they were serious about controlling model railroads.

The first chapter of Hackers describes the interplay between trains, their control, and what the TMRC meant to different students: 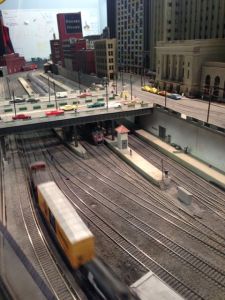 “There were two factions of TMRC. Some members loved the idea of spending their time building and painting replicas of certain trains with historical and emotional value, or creating realistic scenery for the layout. This was the knife-and-paintbrush contingent, and it subscribed to railroad magazines and booked the club for trips on aging train lines. The other faction centered on the Signals and Power Subcommittee of the club, and it cared far more about what went on under the layout. This was The System, which worked something like a collaboration between Rube Goldberg and Wernher von Braun, and it was constantly being improved, revamped, perfected, and sometimes “gronked”—in club jargon, screwed up. S&P people were obsessed with the way The System worked, its increasing complexities, how any change you made would affect other parts, and how you could put those relationships between the parts to optimal use.” 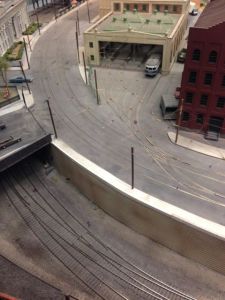 For model railroaders, the TMRC is probably in the top 10 most famous layouts in the world along with names like John Allen’s Gorre & Daphetid, George Sellios’ Franklin & South Manchester, and famous club layouts like the San Diego Model Railroad Museum.  For techies, there is no other layout in the world of interest that’s anywhere in the TMRC’s league.

It shouldn’t surprise anyone that model railroading and computers have always been bedfellows – even today model railroading has led the way in developing standards around Digital Command Control, interfacing locomotives, signalling, and other controls to a computer, and the Java Model Railroad Interface has provided us the world’s first successful test case of the Gnu Public License (the GPL), the open source software license that Linux and much of open source code relies on! 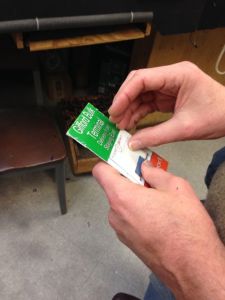 With all of this background, I probably undersold the importance of the whole thing to my college roommate and his wife who live in Boston.   When they asked me what I wanted to do during our afternoon together it struck them as a bit odd that I’d already emailed the club from Scotland, had the phone number, and was anxious to make sure we didn’t miss the window.

Walking into the layout room we were met by the wonderful MIT alumnus and club member John Purbrick. He proceeded to give us an hour long tour showing us the various control systems, buildings, car card operating scheme, points of interest on the layout, and description of future plans. 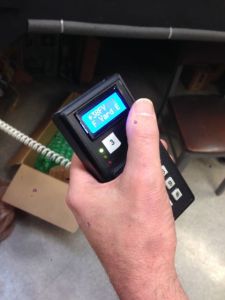 TMRC uses a home grown software system (written in Java with the fronted in Python, all running on Linux) to run the trains.  The layout is still using DC block control, and trains can be run via the main computer system, or engines can be assigned to one of the many hand-built walk around throttles.  All turnouts are computer controlled and electronically operated, none are hand thrown.  For each yard or town area, there’s a diagram of the track layout with numbers on the left and right hand sides.  By keying in the number 0 on the left, and the number 5 on the right for example, the turnouts are all automatically thrown to present a route between the two points.  It’s simple, elegant, and impressive for a home built system.  As Mr. Purbrick put it, “We use a home built system on this layout because here at MIT, we have some experience with software.” Trains are detected by the software using electrical resistance, so operators can see from the software whether a train is on a siding, train with engine, or no train at all.

The main level of the layout is mostly complete, but there are plans for additional levels, and the layout features several huge helixes.  All visible mainline track is Code 83, sidings are Code 70, and there is some Code 55, and all visible turnouts are hand built.  There’s also a tram system that runs on one part of the layout.  Rolling stock varies but includes locomotives from Atlas, Athearn, and Kato. The president of Kato has visited from Japan and brought with him a gift of a few locomotives and some passenger cars. 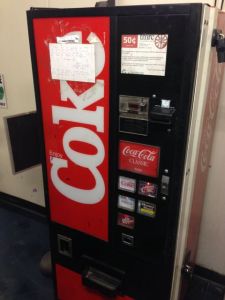 The TMRC receives no financial support from MIT other than free use of the space.  Just like in the late 50s (and covered in the book Hackers), the TMRC is supported from the proceeds that are made by selling soda from a machine in the hallway, and they turn a tidy profit according to Purbrick. A hand scrawled note affixed to the machine explains where the profits go and encourages patrons to email soda suggestions to the club for inclusion on the menu.

These days there aren’t many members left, apparently.  Maybe a dozen or so, although anyone can join. There was only one other member there while we visited, and the club struggles to get enough people together for operating sessions. Apparently there are several other thriving clubs in the area, but I wondered if there wouldn’t be a population of students out there who might not know of the TMRC’s heritage, it’s incredibly complex computer control system, and its delightful layout? 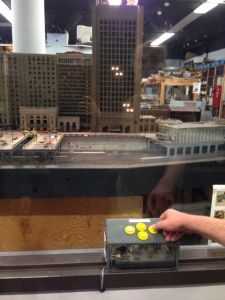 As we made our way out at the end of the tour, Mr. Purbrick told us that we couldn’t leave without seeing the Tetris building.  From the hallway looking through the windows onto the layout, there is a control box.  When activated, the iconic tetris music begins to play, and the windows of the skyscraper light up to represent tetris blocks, which descend.  You can play a game of tetris represented on the windows of a building modelled by the TMRC, all powered by custom software and hardware components.  The creator of Tetris himself has been by to see this particular implementation, and while it wasn’t quite finished, he is said to have given it his approval.

“It’s one of our better hacks,” said John Purbrick, and I couldn’t agree more.